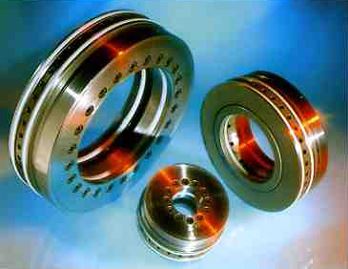 ROTOSTAT systems are rotating unions with hydrostatically controlled gap seals and are used wherever high speeds and pressures are required. The stationary and rotating parts do not come into contact. Only viscous friction develops, the leakage occuring is kept within narrow limits to be determined in advance and this leakage must be returned.


Metallic wear is impossible. There is no relationship between pressure and speed. During rotation, a minimum pressure is always required to ensure the gap control. Most pressurized media, even gases, can be transferred. ROTOSTAT systems are used wherever high speeds are required. ROTOSTAT (N + A series) is availabel both as a cartridge element for various diameters and as a complete sandwich design multi-channel rotating union. Therefore, the essential parts can easily be replaced. ROTOSTAT model E is available only as a complete rotating union in both single and multichannel versions.


ROTOSTAT E
ROTOSTAT E is a sealing system with a geometrically fixed predetermined, and hydrostatically set gap heigt.
The pressure affects the gap height in such a way that the parts move over each other without contact and the hydraulic losses (leakages) are kept low. The operating parameters determine the dimmensions and selection of the materials. ROTOSTAT E therefore allows the transer of all media, even gases.
ROTOSTAT E is available only as aa complete rotating union.

ROTOSTAT N + A
ROTOSTAT N + A consists of radical cartridge elements which, depending on the number of channels, are located next to each other between the housing and the shaft.
The pressurized medium is conveyed within the ROTOSTAT.
The gap height between the stationary and rotating parts is 10 to 15 µm. The inverse gap control system ensures a constant gap under all operating conditions. Elastic, pressure-dependent variations are absorbed by hydraulic compensation, so the consistency of the gap height can be guaranteed even at pressures of 3.000 psi.
The mechanical losses (friction losses) are extremely low due to the viscous friction. The hydraulic leakages can also be kept within narrow limits by the gap control system.
The design ensures that free axial forces are not transmitted to the housing of bearing. If the rotary shaft connection is blocked due to contamination or shaft displacement, ROTOSTAT continues its rotation on its internal seals. The shaft and the housing are not damaged immediately.
Rapid re-utilization of the rotating union is guaranteed by replacing the ROTOSTAT elements. 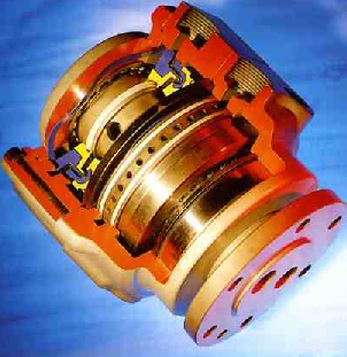 Axial, single-channel rotating unions with hardened mechanical face seals and partial hydrostatic relief. This means a long service life and optimal use. The selection of the material for the mechanical seal and technical design details such as eccentric piston and automatic alignment compensation allow standard high pressures as well as high speeds for applications with the most diverse media.

ROTODISK S
Axial, single-channel rotating union with hydrostatically relieved mechanical seal, and with an automatic alignment compensation system for the primary seal.
The hydrostatic relief and automatic alignment compensation allow simultaneous high pressures and speeds.
The mail area of application is the supply of coolant through the spindles of machine tools.
ROTODISK S is safe to run dry. It is available as a complete rotating union or in the form of bearing-less rotating unions only.

The following may be supplied: 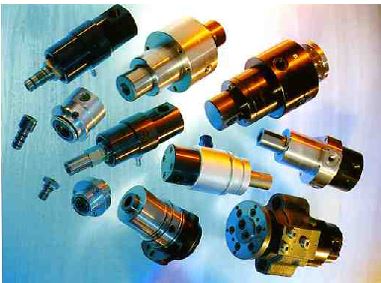 ROTODISK N
Axial, single channel rotating unions without hydrostatically relieved mechanical seals in various size.
For take out pressures up to 600 psi, speeds up to 6.000 r.p.m., suitable for the most diverse media and applications depending on frictional combination and design. 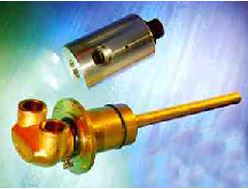 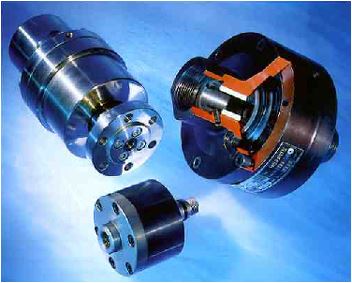